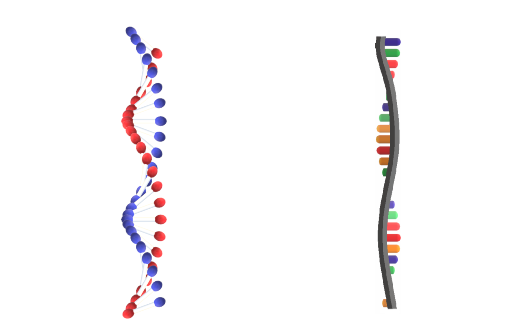 What are Nucleic Acids?

Nucleic acids are complex molecules that are made of nucleotides. Nucleotides are made up of at least one nitrogenous base(a nitrogen-containing molecule that acts as a base, a sugar with 5 carbon atoms, and a phosphate group(a phosphorous atom bonded with four oxygen atoms).

Nucleic acids are found in all living things. Without nucleic acids, no living organism could survive.

There are two main types of nucleic acids found in all living things.

RNA is the second main type of nucleic acid. RNA is like half of a twisted ladder; it only has one side, and the nucleic acids do not form in pairs. The four nucleic acids in RNA are Adenine, Uracil(instead of Thymine), Cytosine, and Guanine. RNA’s job is to help DNA make proteins. There are three types of RNA: Ribosomal RNA, Transport RNA, and Messenger RNA. Each type of RNA serves a different purpose in protein synthesis(the making of proteins; see my post on protein synthesis to learn more).