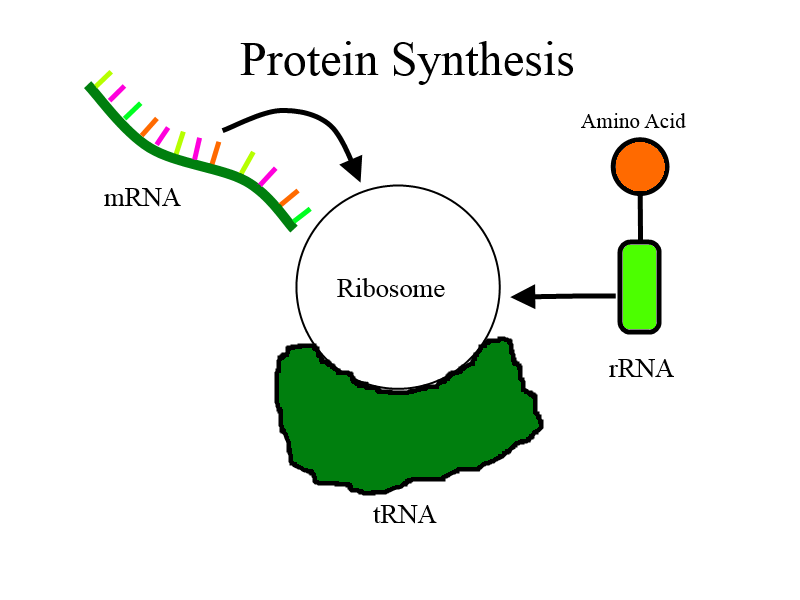 RNA(ribonucleic acid) is another type of nucleic acid. You can think of DNA as a zipper; it has two strands. However, RNA only has one strand; half of a zipper. There are three types of RNA that help in the process of protein synthesis: Messenger RNA, Transfer RNA,  and Ribosomal RNA.

Ribosomal RNA(rRNA) is what the protein is made on. It makes up part of the protein. The ribosome attaches to the rRNA, and protein production begins.

Protein synthesis is the process of making proteins, which are complex molecules that make tissues and cells, forming traits. These proteins are made in organelles called ribosomes. DNA contains the instruction to make proteins, but it cannot leave the nucleus so the genetic information is copied and sent to mRNA. mRNA takes the genetic instruction to the ribosome, and tRNA transfers amino acids to the ribosome. rRNA makes up part of the protein; it is what proteins are made on. Ribosomes use the genetic instruction, brought by mRNA, to order amino acids, brought by tRNA, into proteins. These proteins are created on the rRNA.